Michael Morgan was born in 1957 and raised in Washington, D.C. where he attended public schools. He attended McKinley Tech High School in Washington D.C. and was affiliated with the D.C. Youth Orchestra Program but began conducting at the age of 12. While a student at Oberlin College Conservatory of Music (studying composition) he spent a summer at Tanglewood. There he was a student of Gunther Schuller and Seiji Ozawa and it was at that time that he first worked with Leonard Bernstein. During his final year at Oberlin he was also the Apprentice Conductor of the Buffalo Philharmonic under Julius Rudel.

In 1980, he won first prize in the Hans Swarovsky International Conductors Competition in Vienna, Austria and became Assistant Conductor of the St Louis Symphony Orchestra under Leonard Slatkin. His operatic debut was in 1982 at the Vienna State Opera in Mozart’s “The Abduction from the Seraglio”. In 1986, Sir Georg Solti chose him to become the Assistant Conductor of the Chicago Symphony Orchestra a position he held for five years under both Georg Solti and Daniel Barenboim. He became music director of the Oakland East Bay Symphony in 1990. Maestro Morgan serves as artistic director of the Oakland Youth Orchestra, and was the music director of the Sacramento Philharmonic Orchestra (and the Sacramento Opera) from 1999-2015 and artistic director of Festival Opera in Walnut Creek, California for more than 10 seasons.  He teaches the graduate conducting course at the San Francisco Conservatory of Music and is Music Director at the Bear Valley Music Festival in California.   In 2002 and 2003 he taught conducting at the Tanglewood Music Center and has led conducting workshops around the country. As Stage Director he has led productions of the Bernstein Mass at the Oakland East Bay Symphony and a modern staging of Mozart’s Don Giovanni at Festival Opera, where he has also staged Britten’s A Midsummer Night’s Dream and Gounod’s Faust.  As a chamber musician (piano) he has appeared on the Chamber Music Alive series in Sacramento as well as the occasional appearance in the Bay Area. As a guest conductor he has appeared with most of America’s major orchestras including the New York Philharmonic, National Symphony, Baltimore Symphony, Philadelphia Orchestra, Atlanta Symphony, Alabama Symphony, Houston Symphony, Los Angeles Philharmonic, Seattle Symphony, San Francisco Symphony, Pittsburgh Symphony, Detroit Symphony, Vancouver Symphony, Winnipeg Symphony, Edmonton Symphony and Omaha Symphony. He was Music Advisor to the Peoria during their most recent conductor search. As conductor of opera he has performed with St. Louis Opera Theater, New York City Opera (in New York and on tour), and the Staatsoper in Berlin. Abroad he has conducted orchestras in Europe, South America, the Middle East (Israel and Egypt) and even the Kimbaguiste Symphony Orchestra in Kinshasa, Democratic Republic of Congo.

In 2005 he was honored by the San Francisco Chapter of The Recording Academy with the 2005 Governors Award for Community Service. On the opposite coast, the American Society of Composers, Authors and Publishers (ASCAP) chose Morgan as one of its five 2005 Concert Music Award recipients. ASCAP further honored Oakland East Bay Symphony in 2006 with its Award for Adventurous Programming. The San Francisco Foundation honored him with one of its Community Leadership Awards and he received an Honorary Doctorate from Holy Names University in Oakland,CA. In 2014 he gave a TEDx Talk and was featured by Musical America as one of their “Profiles of Courage”.

He has served of the boards of the League of American Orchestras and the International  House at the University of California, Berkeley, and the National Guild of Community Schools of the Arts. Currently he is on the boards of the Purple Silk Music Education Foundation, the Oaktown Jazz Workshops, and the Mathematical Sciences Research Institute.

“I could have enjoyed an immediate encore of the entire performance.”

“In Morgan’s hands, the full scope of this powerful opus – its anguished evocations of the battlefield, its restless search for some king of apotheosis or redemption, and tis perplexing culmination – registered with wonderful immediacy…Morgan and the orchestra traversed all the symphony’s twists with eloquence and care.”

— Joshua Kosman for SF Gate/San Francisco Chronicle on a performance of Shostakovich Symphony No. 8 with the Oakland East Bay Symphony (full article here)

“[Michael Morgan] has been shaking up programs with this orchestra for a quarter century.”

“Music Director Morgan guided the choir through the emotional peaks and valleys of the piece. The enormous ensemble was able to lull listeners into a gentle acceptance of their ephemeral and humble existence… in this performance I found myself yearning for more, even as the seventh movement was drawing to a close — heaven drifting away like a fleeting dream.”

“The way the orchestra played those chords and all the myriad entrances and cutoffs in the other two pieces on the program indicated Morgan’s obvious control of the ensemble throughout an evening of welcome contrasting dynamics, complex rhythms, moods and tempi.”

— Patricia Beach Smith for The Sacramento Bee on Beethoven’s Symphony No. 2 with the Sacramento Philharmonic (full article here)

“In Neptune, conductor Michael Morgan coaxed finely drawn and restrained playing, especially during the Bernard Herrmann-like motifs that spiraled toward the end.”

“[Morgan’s] development of the line in the brooding first movement was excellent, with find woodwind playing and good sectional clarity, while he infused the slow movement’s nostalgic folk character with a very amenable tenderness. Despite the exciting, timpani-ignited bombast of the Scherzo, Morgan still maintained a fine clarity of texture and the contrasting trio section was sensitively paced and phrased. In the Finale, which is most susceptible to excess, the performance emphasized the restatements of the first movement’s main theme and the climaxes were achieved with good emotional effect, sans melodrama. It was a very satisfying performance.”

“Many people may not know that he traded in the opportunity to be a jet-setting, big name conductor for his present career. In his chat with SFCV, he talked about that choice, and why he loves what he’s doing.”

“When Morgan joined the Oakland East Bay Symphony, the downtown area was in desperate need of revitalization. Today, it’s thriving—and Morgan’s courageous, forward-thinking leadership is a big part of the reason. Morgan hasn’t simply rebuilt his orchestra. He’s helped chart a new course for the city he calls home.”

“Leave it to Michael Morgan, conductor of the Oakland East Bay Symphony, to lead a Messiah sing-along with a klezmer band, as he did in 2006. Or put Carlos Santana on stage as a soloist with the orchestra, as occurred in 2010. Or conduct a concerto for sitar and orchestra, composed by Ravi Shankar, as Morgan will do next spring. There is only one Michael Morgan, music director for nearly 24 years of Oakland East Bay, which opens its 25th season Friday at the Paramount Theatre. He thrives on Beethoven and Brahms, but also views classical music as an art form on the move, mirroring its community. Which is why his audiences – the most diverse group of classical listeners in the Bay Area — get to experience gospel choirs, Armenian dancers and brand new works by Filipino, Israeli, Palestinian and Chinese composers.”

“This is one conductor who eschews the glitz and mega-budgets that often come with the territory, and his audience loves him for it — they’ll follow him anywhere…The audience cheered. Morgan is their conductor. The OEBS is their orchestra. After 25 years, it’s still a match made in heaven.”

“Michael is a trailblazer. There are very few African-American conductors who have had the kind of tenure he has had in Oakland, have accomplished as much and have the respect he has in the field.”

Michael is a trailblazer. There are very few African-American conductors who have had the kind of tenure he has had in Oakland, have accomplished as much and have the respect he has in the field.

I could have enjoyed an immediate encore of the entire symphony. 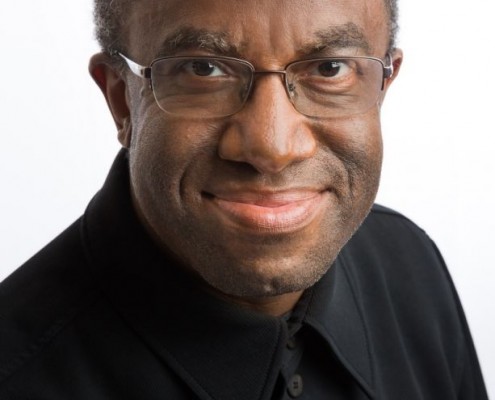 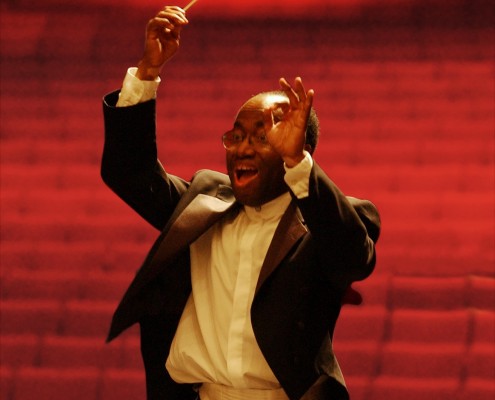 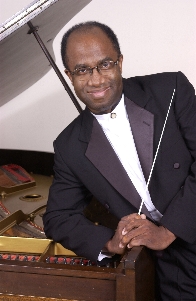 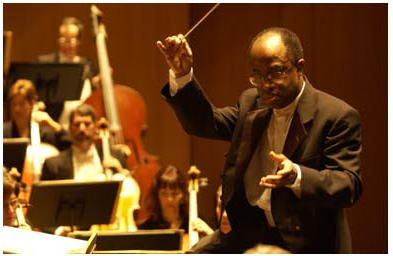 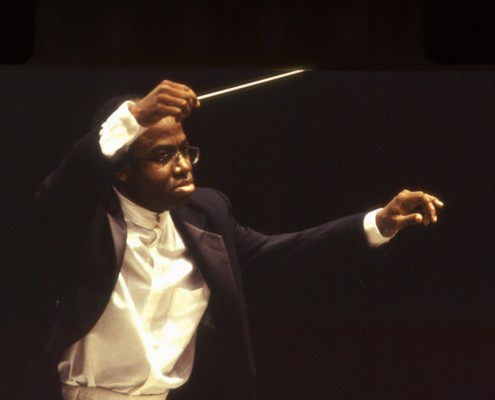 Performed November 14, 2008 at the Paramount Theater in Oakland, California by the Oakland East Bay Symphony.

This talk was given at a TEDx event, where Morgan spoke about a life-changing event that inspired him to create a life focused on music and its ability to bring people together across social, ethnic and economic boundaries.

Preview: Rehearsal of the Oakland East Bay Symphony for Tchaikovsky Symphony No.5