In November of 1975 the newly-formed Raphael Trio made “a most auspicious debut” (The New York Times) at Carnegie Hall as winners of the Concert Artists Guild Award. Since then, they have been presented regularly in the leading concert halls of the United States and Europe, appearing in London, Geneva, Paris, Frankfurt, Vienna, Budapest, Venice, Washington, DC, San Francisco, Denver, Pittsburgh, Baltimore, Chicago, Boston and New York.  At Carnegie Hall they have been presented in cycles of concerts dedicated to the works of Brahms, Beethoven, Schubert, Dvorak, Mozart, Mendelssohn, Faure and Schumann.

The Raphael Trio is acclaimed for its creative approach to programming, including their series focusing on the works of single composers. In celebration of their 25th anniversary, they appeared in concerts throughout the US, performing the complete Beethoven trios in cycles of three concerts, including Washington, DC (Phillips Collection), Marlboro College, Vermont, WGBH/Boston and in gala concerts in New York, which were broadcast by National Public Radio and WNYC and Performance Today, NPR’s live broadcast concert series.  The Trio’s performances of the complete Mozart trios have been praised at the Vienna Konzerthaus’s “Mozart Tage,” Magyar Radio’s Mozart Festival in Budapest, Duisburg’s Mozart Festival, in live recordings for National Public Radio, on tour in Holland and Austria, and at the Kennedy Center in Washington, DC. In celebration of their fifteenth anniversary they performed a three-concert series of the late Haydn Trios at Carnegie Hall and in commemoration of the 200th anniversary of Haydn’s death, they repeated the series at the Phillips Collection in Washington in 2009 and at Manhattan School of Music.  Their performances of the complete Beethoven trios have been lauded in New York’s Town Hall, Frankfurt’s Alte Oper, San Francisco’s Beethoven Festival, the Sheffield Festival, London’s Wigmore Hall Beethoven Festival, and New York’s Carnegie Hall.  The Raphael Trio appears annually in concerts at Washington’s Phillips Collection.

In addition to their commitment to presenting the standard repertoire as well as the lesser-known works by the great composers, the Raphael Trio maintains an active role in commissioning, performing and recording works written for them by contemporary composers Their world premieres of works written for them include trios by Frederic Rzewski, Su-Lian Tan, Rainer Bischof, Thomas Oboe Lee, Douglas Weiland, Edward Cohen, Marjorie Merryman, Dina Koston, and David Liptak.

“The performances, eager, fervent and deeply committed, were well-matched to the ardor of the trios.”

“Listening to the Raphael Trio and guest violist Cynthia Phelps tear into Brahms’ Piano Quartet in G Minor at Sunday’s  Philips Collection recital, it was difficult to imagine Brahms played with more guts or irrepressible vigor. Cellist Susan Salm’s attacks were as bold and her tone as sinewy and resinous as they had been throughout this all-Brahms program. Violinist Andy Simionescu’s playing, too, had all the passion Brahms requires, allied to a sweetly singing tone, and Phelps provided a handsomely dark and forthright sound that contrasted well with her colleagues. Pianist Daniel Epstein was no less involving, though he drew the ear more with a supple touch and a careful balancing of inner voices.”

“Then came the Mendelssohn Trio in C Minor, Op. 66, and everything changed. Beginning emotionally with tension and passion, pianist Epstein ripped out liquid arpeggios and strong chords. Salm and Simionescu played with sweetness, longing and desire. Most exquisite was second movement, with its slow hymnlike theme. The trio sustained this poignant lyricism until the very end, a painfully beautiful diminuendo.”

“Listening to the Raphael Trio play chamber music is a lot like reading a really engrossing book. Reality drops away for a while, and when you come to the end, it takes a moment to remember what day of the week it is… The trio has been together for 30 years, and it shows in their ensemble instincts. They know each other’s minds and play with cohesive interpretation of the music.”

“The program’s first half was filled by Franz Schubert’s enormous ‘Piano Trio in B Flat Major, Op. 99.’ D898. Each musician brought an appropriate vocal sensibility to Schubert’s expressive melodic passages, playing with a full palate of colors and tremendous energy. Even the simplest patterns of repeated notes were played with direction, shape and purpose.”

“The program ended with Felix Mendelssohn’s ‘Trio in C Minor. Op. 66.” Although the four-movement piece was written just 18 years after Schubert’s death, it speaks of a different era. This is unabashedly Romantic music and the players approached it as such. Throughout the Mendelssohn, the players created drama by pushing the envelope as they reached for extremes in dynamics and dug into robust articulations. This was balanced by absolutely elegant legato playing and ‘Andante’ movement played with the tenderness of a love song. They used rubato and tenuto to create flowing emphatic statements. This was not sloppy emotionalism but rather a matter of speaking the language of the music. The occasional grins that passed from player to player added to the performance’s excitement.”

“The performances, eager, fervent and deeply committed, were well-matched to the ardor of the trios.”

“These gifted musicians play with an almost palpable intensity. They launched into a detailed and emotionally gripping performance that allowed all to triumph both individually and collectively.”

“I admired the richness of ensemble sonority from players in moments of greatest tension and the expressive style of their performance throughout each work.”

“In the ‘Ghost’ trio, the expressive strengths of each player’s approach, the subtle dynamic shadings and the taut way the performance gelled made this a reading which was both stylistically sure and, for the listener, enlivening.”

“All three players are fine musicians, and after this long a period together they have produced a superb working ensemble.”

“The spiritual complexity and emotional richness of their playing were held in a perfect balance.”

“It’s just the sort of spirit one wants in chamber music, and in Dvorak’s in particular.”

“The Raphael exhibited a synergy that resulted in a solid sounding and musically sensitive performance.” 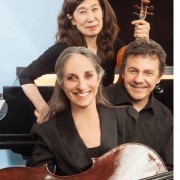 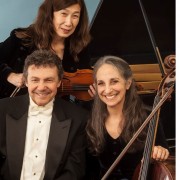 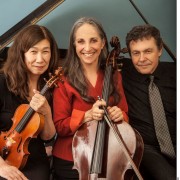