The Ritz Chamber Players, the nation’s first chamber music ensemble series comprised solely of accomplished musicians spanning the African diaspora, brings a fresh, new energy to the classical music genre. The Ritz Chamber Players include some of the world’s most accomplished musicians. They have performed with the most prestigious musical organizations such as the New York Philharmonic, Boston Symphony, Pittsburgh Symphony, Philadelphia Orchestra and London Symphony.

Its highly successful début concert at New York’s Weill Recital Hall in Carnegie Hall in 2004 was marked by a standing room only crowd, with critics proclaiming the group’s performance “extraordinary” and “vital and fresh.”  The group made its international radio début on the BBC World Service and WYNC New York with a concert broadcast to more than 40 countries in 2005, and its first national television appearance on the 37th Annual NAACP Image Awards in 2006. The Ritz Chamber Players has been guests of the highly-praised National Public Radio and the Tavis Smiley Shows and is a regular performer at the Madison and Amelia Island Chamber Music Festivals.Founded in 2002 by Artistic Director and Clarinetist Terrance Patterson, the Ritz Chamber Players presents a subscription series at the Times-Union Center for the Performance Arts in Jacksonville, Florida and at Atlanta’s Kennesaw State University. The Ritz Chamber Players performs chamber works from the standard classical repertoire in many combinations, as well as highlighting the works of contemporary African-American composers. The Ritz Chamber Players have recently performed in residencies at the University of Washington and the Cincinnati Symphony Orchestra, as well as concerts at the Miami Festival, Montclair’s Peak Performances Series, Baltimore’s Shriver Hall and a special presentation at the Juilliard School, where they will be Artists-in-Residence for the 2009-2010 season. The Ritz Chamber Players seek to increase the visibility of African-American classical composers and heighten public awareness of the African-American musician contributions within the classical music genre. 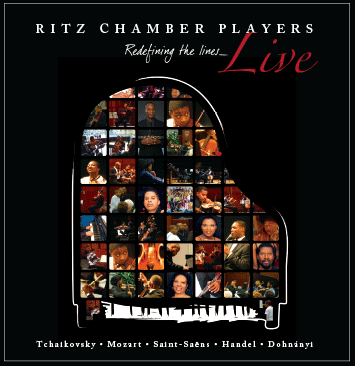 “The Ritz Chamber Players, a very classy group of talented young musicians, enlivened a Sunday afternoon in Fletcher Opera Theatre with an excellent performance of a mixture of chamber music chosen from the works of mid-twentieth-century African-American composers as well as from the standard Classical and Romantic repertoires. The members of this ensemble – Kelly Hall-Tompkins, violin, Amadi Hummings, viola, Troy Stuart, cello, Kevin Sharpe, piano, and Terrance Patterson, clarinet – represent as high a level of technical accomplishment and musicianship as Raleigh audiences have been privileged to hear in recent chamber music performances.”

“Hall-Tompkins, Hummings, and Stuart began the concert with two brief contemporary works which clearly revealed their thorough understanding of the musical language, compositional techniques, and intellectual meaning of this music. Helga, the opening piece, composed by Alvin Singleton in honor of the wife of Charles Siegel on the occasion of her seventieth birthday, is a beautiful, contemplative work made up of long, primarily consonant chords in progressions bespeaking their twentieth-century orgins but lacking the expected dissonances an audience might expect to hear in such contemporary music. The voices of the violin, viola and cello express the composer’s deep emotional involvement with his subject in the long, sustained chords, the firmness and pure sound of which were a tribute to the players’ skills.”

“Much of Mozart’s writing throughout the work demanded the best playing of clarinetist Terrance Patterson, violist Amadi Hummings, and pianist Kevin Sharpe, whose light classical touch was exactly right for most of the music Mozart assigns to the piano. The theme of the Andante movement required and received beautiful, legato treatment from Patterson and Hummings, and all three players enjoyed displaying their technical skills in the movement’s development section, which offered as much challenge as they could wish. The following Menuetto again allowed Patterson to demonstrate his ability to play long, beautiful lines and, a bit later, to engage in spirited musical by-play with Hummings, whose skill as a violist shined through more clearly than at any other passage in the trio. The last movement, Rondeaux: Allegretto, is a brilliant test of the virtuosity of all three players. They met all difficulties with success, and brought the trio to a successful conclusion.”

“Perhaps the most satisfying music of the afternoon, however, was the second half of the concert, a performance of Felix Mendelssohn’s Piano Trio in D Minor, Op.40. In this work Mendelssohn gave all three players a chance to offer their best playing to their listeners. No one went away disappointed. The opening Allegro revealed that pianist Kevin Sharpe has a great passion for Romantic music in general and the work of Mendelssohn in particular. Sharpe’s awe-inspiring technique is very obvious throughout the work, whether in the incredibly rapid allegro passage or in the slow, contemplative articulation of Mendelssohn’s unforgettable melodies, such as the theme of the Andante movement which seems to project the essence of Romanticism. Hall-Tompkins, too, shone brightly in this work, especially in the highly demanding Scherzo, which calls for every bit of energy and technique the violinist can draw upon. The Finale is one long, uninterrupted flash of brilliance, as all three players gave to their performance the full measure of their virtuosity and musicianship.”

“Coleridge-Taylor’s Variations for Cello and Piano, from 1907, is a gorgeous piece of heartbreaking lyricism, typical of the late flowering of Romanticism in music. Cellist Kenneth Law has a beautiful, well-sustained tone and is capable of handling difficult virtuoso passages with unassuming ease. He was well matched by Terrence Wilson’s ardent pianism.”

“The four-movement quartet is an absolute delight, and Patterson, clarinetist and artistic director of the Ritz, spun pure liquid gold from his instrument. From almost imperceptible attacks to fully capturing the joy of the writing, this was artistry of the highest attainment.”

“Dvorak’s Piano Quartet No. 2 in E-Flat is a favorite and has seen many outings in the Miami area. Infused with the Czech spirit, the work’s passions have rarely been revealed with such force and dynamism as here. While there have been more performances with playing of more refinement and charm, none have surpassed the Ritz for sheer verve and sweep, with special note of the superlative artistry of violinist Tai Murray and the resonant viola of Amadi Hummings. May the Ritz return – and soon.”

“Haydn’s Trio No.3 in G exuded abundant elegance and charm, with many a deftly turned phrase and dynamic contrast from flutist Judy Dines, violinist Tai Murray and cellist Troy Stuart. Dines had a chance to show off a crystalline technique and considerable expressive nuance in Francois Borne’s surefire showstopper, Fantasie Brilliante on Themes from Bizet’s ‘Carmen’, with strong support from pianist Kevin Sharpe.”

“Adolphus Hailstork’s American Landscape No. 2, an atmospheric, jazzy work that gets from only a violin and cello at least a string quartet’s worth of texture, inspired terrifically potent playing by Murray and Stuart. Stravinsky’s L’histoire du Soldat got a vibrant workout from Murray, Sharpe and clarinetist Terrance Patterson.”

“The Ritz Chamber Players, a remarkable ensemble founded to showcase ‘accomplished musicians of the African Diaspora’, spent several days at the Baltimore School for the Arts back in February. The residency was to have finished up with a public concert, but snow (remember snow?) got in the way. The make-up date was Tuesday night, when members of the ensemble returned to the school and were joined by three Baltimore Symphony Orchestra musicians. It was an irresistible program – the autumnal Clarinet Quintet by Brahms and the ecstatic Souvenir de Florence by Tchaikovsky – and it packed the place with students, faculty and just us plain old music lover. BSA’s elegant auditorium, with its startling domed ceiling, isn’t necessarily ideal for chamber music, but has decent enough acoustics. And these players made the most of the space.”

“Carney (now in first chair), Hall-Tompkins, Brown and Finkelshteyn then joined two more Ritz members – violist Amadi Hummings and cellist Troy Kenneth Stuart – and proceeded to bring down the house with Tchaikovsky’s gleaming, tune-rich score. This was very hot playing, practically incendiary in the mad dash of the finale. The students in the hall heard quite a lesson in the art of collaboration, and what it means to throw yourself body and soul into music-making.”

“Live music, especially with a small ensemble, can be a wonderfully transparent and direct connection with the artists on stage. That’s one of the joys of seeing the Jacksonville-based Ritz Chamber Players perform, and the only way to top that charge is to have the chance to see them perform the same program twice, as First Coast audiences were able to this week at their two season finale concerts… And the joy, for those lucky enough to see both nights, was in the, in the moment quality of the program, something not always as visible in large orchestral works with a stage full of people.”

“In Terrence Wilson’s performance of the fiery Balakirev piano fantasy, for example, both nights were crowd pleasers, but he was clearly happier with the first night’s product. While last night’s version wasn’t as flawless. Terrence Wilson even in a face-contorting slightly-off night is worth the price of admission. His solo work was a brave, energetic tight wire act.”

“There were risks aplenty for the other performers, as well. Violinist Tai Murray and virtuoso harpist Ann Hobson Pilot’s duet by Saint-Saens, as well as flutist Demarre McGill and Christopher Rex’s Villa-Lobos pairing, were moments of total exposure for the instrumentalists. The risks paid off: the intricacies of the Lobos and the earnest conversation of the Saint-Saens were colored with slightly different hues each night, and each experience was successful in different ways. Soprano Alison Buchanan, in ensemble pieces by William Grant Still and Andre Previn, was able to showcase her range in these two concerts. Both pieces were written from a strong woman’s perspective (the latter with lyrics from Toni Morrison, a writer never shy about telling women’s truths). A singer with less stage presence might have seemed to be reading a hand-me-down dissertation, but Buchanan has a way of making words her own. From the childlike Little Mother to the dangerous and sassy Stones [in My Bed], the London-based soprano was on her game both nights. Buchanan’s knack for combining an almost operatic storytelling, in her body language and punctuation, with the intimacy required for chamber music, is consistently a joy for Ritz Chamber Players audiences, and gave the RCP’s fourth a powerful sendoff.”

“One of  the most interesting and dynamic ensembles to emerge in recent years.”

“The members of this ensemble represent as high a level of technical accomplishment and musicianship as Raleigh audiences have been privileged to hear in recent chamber music performances.”

“They are really ‘cool’ when this word is defined as ‘an aesthetic of attitude, behavior, comportment, appearance and style.’ They can meet the technical and stylistic demands of any piece of music they choose to play.” 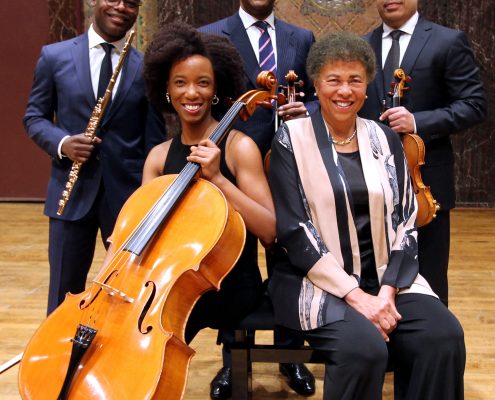 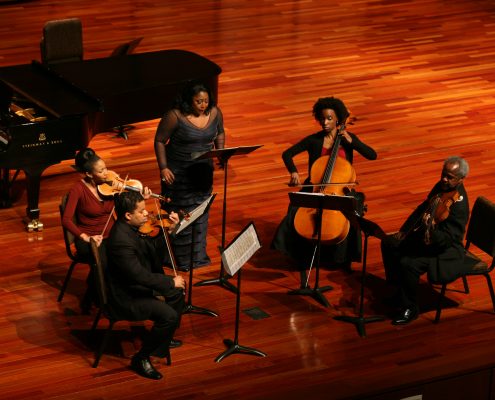 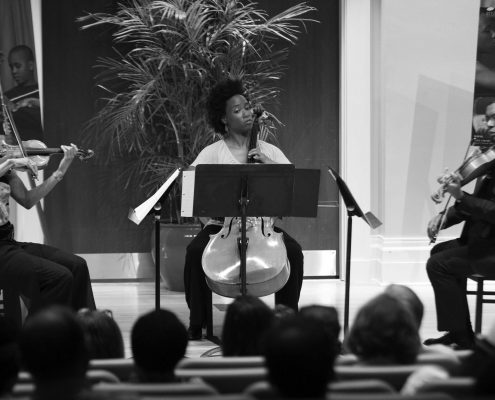 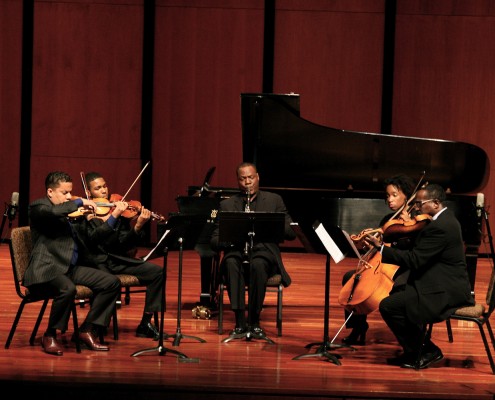 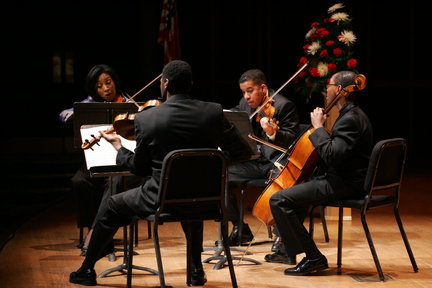 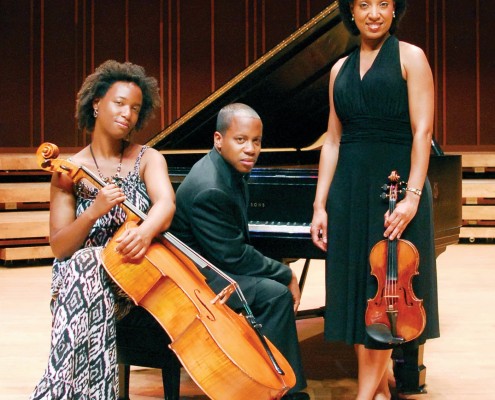 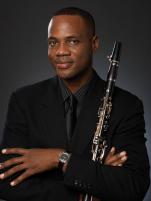 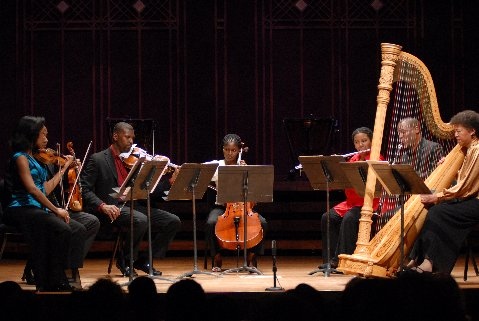 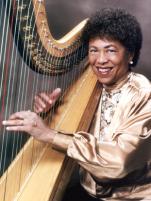 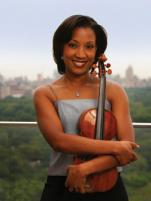 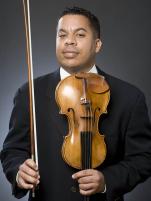 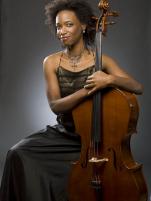 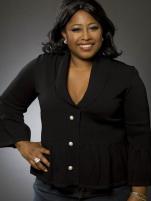 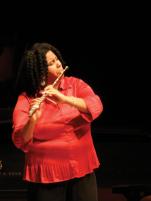 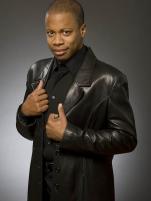 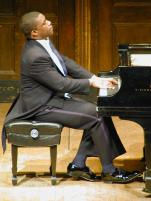 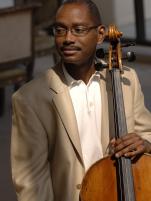 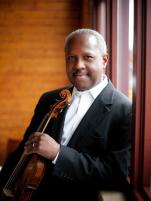 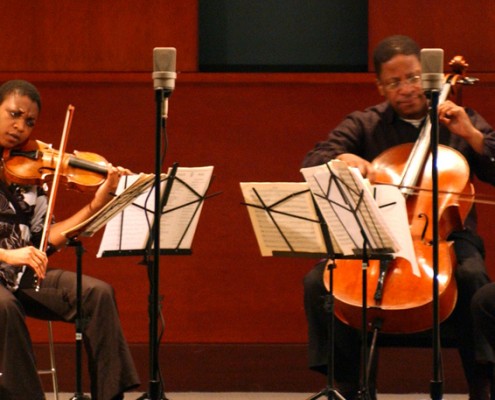 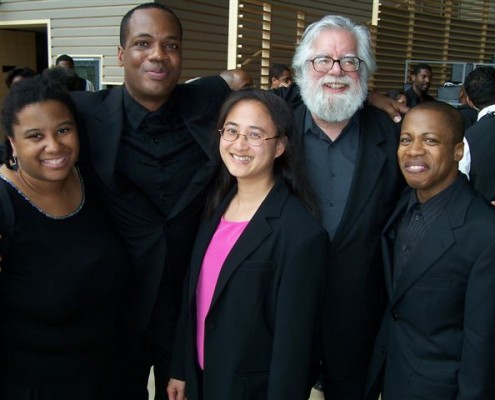 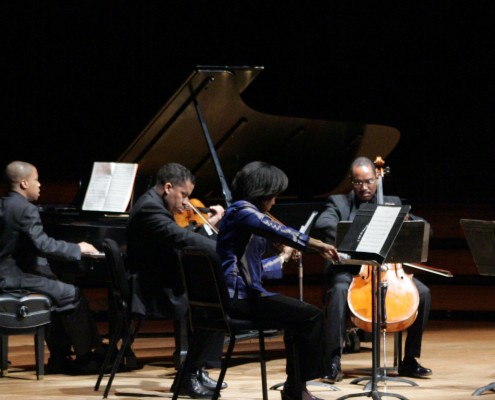